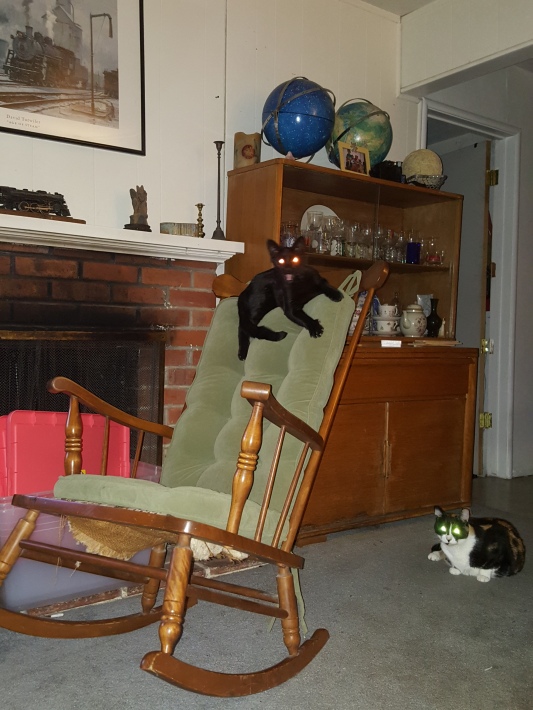 Truth is I experienced a moment of insanity shortly after Christmas. My heart ached for JJ during winter vacation. His friends were all out of town, Santa sent the wrong gifts, and on top of that he had to deal with the mingling of dysfunctional family personalities over holiday meals. Suddenly I had this great idea that a new kitten would bring moods of elation back into the house. And so we went on a kitten hunt.

Kittens are sparse in January. The youngest at our local shelter was six months old. “I want a kitten. One that will grow old with me,” JJ insisted. We called all the pet stores with adoption signs. No one had anything young than a year. I called a friend who works with feral cats. “We have three little black kitties just ready for adoption,” the lady said. She continued, “they are loving, sweet and feisty. Their mother abandoned them. You could take all three.”

We went to visit the lady. JJ fell for the runt kitten, a dainty little girl, a bit timid but warming up to him as we spoke. A week later we went back and picked her up. “What’s her name?” I asked.  JJ didn’t respond.

We decided we would call her “the nameless one” until she developed a personality. We posted her kinky tailed photo on Facebook asking for suggestions. While they are all appropriate descriptions, none of them came near her personality traits. Shadow, Blacky, Smokey, Natasha, Cocoa, B&B, Ebony, Mystic, Smolder, Bitimunous, Amber, Cinnamon, Superwoman, Kinky. All good suggestions but she just didn’t answer to them.

From the picture above, one might want to name her Bright Eyes. But look a little closer. Look under the rocking chair she is so precariously clinging to. This is just one small piece of evidence that her name could be Destructo. Touring our house, I can come up with a few more – Shatter (broken glass), Litter Queen or Sh*t Disturber (thinking out of the box), Psycho (night terrors), Rug Rags (shredded carpet), Pensive (where have all my pens gone?), Curtains (shredded), Photo Bomber (see photo album), Infinity (the figure eights at my ankles to trip me), Xfinity (remote control), Disdress (closet alterations)… and the list goes on.

Maybe I’ll name her when she reaches the senility of Wanda cat. Notice I said “I’ll name her.” Yes, I have been granted guardianship of this cat that JJ no longer allows in his room. Thank God we didn’t take all three.

2 thoughts on “The Nameless One”

This site uses Akismet to reduce spam. Learn how your comment data is processed.

Where is MZ Bull